Aussie Rules is an Australian form of footbal with roots in the early forms of Rugby. It is a physical contact sport and is believed that it predates all other modern forms of football – American, Gaelic, Canadian and Soccer. The game originates from Melbourne, the capital city of Victoria, in the middle of the 18th century as a collaboration of many different football rules that were popular in English public schools at the time.

Today, the most popular sports competition in Australia is the National Australian Football league (AFL) with the highest rates in live attendance and TV viewing. Aussie Rules is mostly played and followed in Australia, but its popularity continues to grow globally each year.

Aussie Rules is played on an oval field which may vary in size. The width can be between 110 and 155 meters, while the length is between 135 and 185 meters. At each end of the ground, there are two goalposts with a height not less than 20 meters and placed at 6.4 meters apart. There are also two shorter goalposts, known as behind posts, raised to at minimum 3 meters and standing at each side of the goalposts again at 6.4 meters. The game is played with an oval ball with a weight varying between 480 and 480 grams. 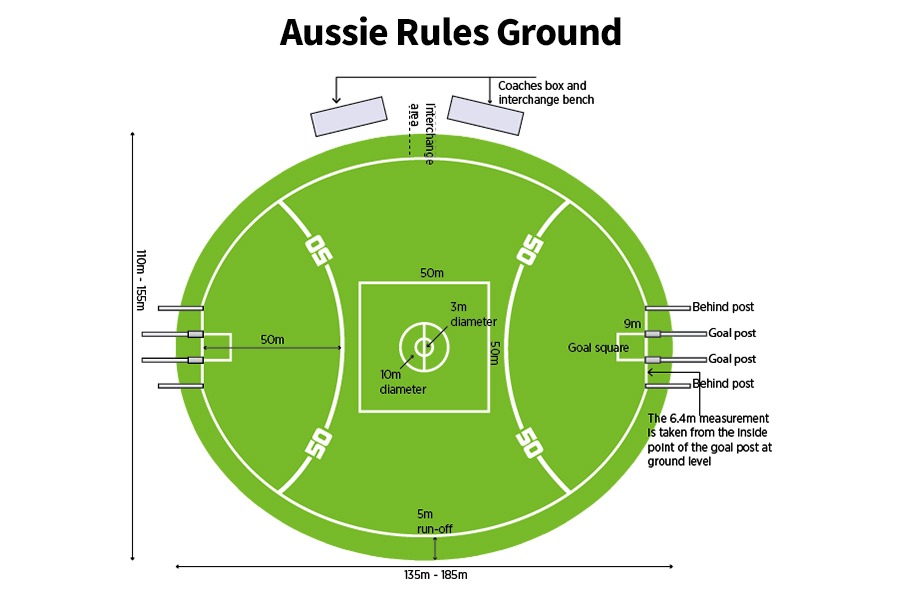 Simply explained, the aim of the game is to score more points than the opposite team by kicking goals towards the goalposts. If a ball is kicked between the tallest goalposts without being touched by anyone else along its way, six points are scored. However, only a point is scored if the ball is touched by a player before crossing the scoring line, if the ball hits one of the goalposts or goes behind them. If a member of the opposite team has carried the ball behind his own goal line, a point is scored.

Each match starts with an umpire bouncing the ball in the center of the field and players from the two opposite teams leaping up and trying to knock it down to another teammate. This repeats each time a point is scored.

Teams consist of 18 players on the field. They can run with the ball but with every 15 meters the player holding the ball must bounce it or touch the ground with it. Running with the ball may last until the player is held by the opposition. The ball can be passed backward and forwards, but throwing is not allowed. The ball must be be ‘handballed’ instead, which means holding the ball in the palm off the hand and punching it with the other hand.

Players are penalized with a free-kick to the opposite team for many reasons. These are only some of them – holding the man, running too far, throwing the ball, out on the full and several more.

How to Make a Bet on Aussie Rules

Knowing the basic rules of the game is recommended to be successful in sports betting. Not only for placing bets on Aussie Rules matches but in general for all sports. Take your time to read articles related to AFL like this one if you want your bets on Australian football to be profitable. Once you feel ready to go, register an account at Lilibet and jump to the Sportsbook section. Place your bets on the markets you wish with a stake amount of your preference. You can place a Single Bet, Multibet, or System Bet in the bet slip. Read more about different bet types here.

Grab a Sports Bonus at Lilibet and Test Your Luck

Bonuses at Lilibet Casino are always very generous and the one for Sports is no exception. Don’t hesitate to grab your bonus as soon as you register an account at Lilibet and make your sports betting even more exciting!